Summer is totally winding down already, nooooo. I am so not ready to go back to school. I've been trying to get some worthwhile things done before it does, hampered by the fact that I'm not tired at 3am and then can't crawl out of bed before noon.

*I did the major edits on About Face finally and have gotten back the one reader's typo list to fix. Once the other two are back, I'll put the pdf/ebook version up on Smashwords, although I'm thinking about holding off on the physical copy for a bit.

*I was hoping to do something about last year's NaNo as well, but the more i look at it, the more terrible it seems. I'm wondering if starting over, with an actual plot outline, is the only option. Also I'm trying to write this short story for an open call, but I'm not thrilled with it, and I don't want to waste the rest of my summer on something that'll end up like that time with the ABNAs that one time. :/ oh well, getting paid to write is for chumps.

*More White Collar has appeared on Netflix and I'm enjoying season 3. They're well-written, in my opinion, and it's nice to see people on tv being clever. I keep meaning to give Leverage another shot because I think I ought to enjoy it in the same way.

*working on a corner to corner afghan and I'm really enjoying the pattern. I'm doing it up in neapolitan stripes (tan, brown, pink, mauve, white) for a friend, and it's coming out really nicely.

*Also have been reading Lord of the Rings, which I read so long ago (4th grade, don't judge me) that i recall basically none of it, and I'm enjoying it quite a bit. I'm at the council of Elrond at the moment, and enjoying the way they call Legolas "the weird elf."

*New nails! Turtles are nail tattoos, which look cool but were really annoying to peel off from the backing. Yellow "sand" is Wet n Wild fast dry which went on really nicely, I should have for sure tried them before, and blue "ocean" is Zoya's Zuza. 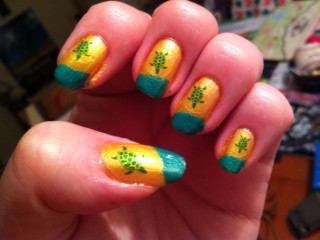