Sanapig died over the weekend. I'm glad it's over because he was just a shell of himself for weeks at the end and I hated seeing him like that, but he was definitely my favorite Snowpig since Shelbi posted about them being born and I'm pretty sad about it.

When they were babies, Sanapig and Nokkun were inseparable and even as adults, if I got one out, the other would pace the cage making anxious noises. I never got a picture of it, but often I would look over and see Nokkun casually nibbling Sanapig's ear over the food bowl, so I hope wherever guinea pigs go, they're back together now. I bet his sisters are there too, since I can't imagine all of these pigs lived as stupidly long as Sanapig and Datte have.

the Lucifer single dropped the week they were born, and during the 17 hour drive home from Kansas with 3 terrified baby guinea pigs, I played that song over and over for them because it made them purr. As adults, they would still sit and listen to music or concerts, but would get more excited and purr for SHINee. It's impossible to guess how many Shounen Clubs Sanapig has watched with me, or how many episodes of One Piece.

I've taken so many pictures of Sanapig in the 6.5 years he's been here that it's hard to decide what to even post here but, here. 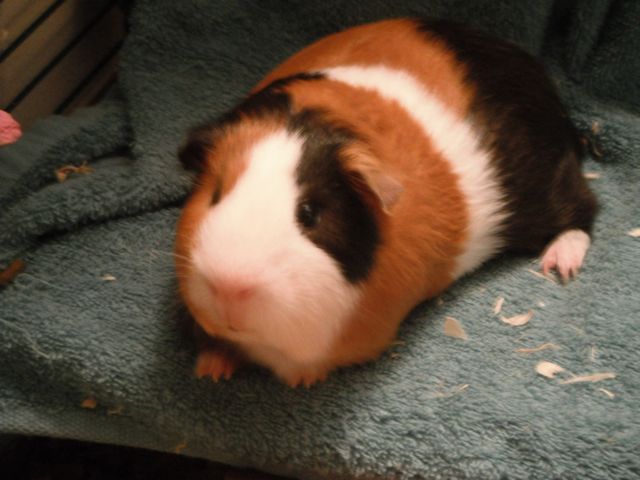 He's been here so long I don't even know what to say about him. We always called him the most oshare one because of his calico and super long whiskers. He used to nap on top of the ledge in the same position as I was sprawled on the couch and would watch terrible TV with me, especially Hoarders and Storage Wars and Law & Order. He liked to eat bites off my banana because he didn't want me putting pieces on his cage floor (it would get dirty). He was huge, like a small rabbit. At the vet they had to weigh him on the dog scale. When I had to get his steroids from the real pharmacy a hilarious string of mishaps happened where I had to explain no, Sara is not short for Sanapig and no, I am not his spouse.

Sanapig was my sadness buddy. When Nokkun died from a tumor about 3 years ago, I thought for sure Sanapig would just follow him right after, but nope, he just kept on going even though he and Datte fought too much to live together. He really liked Christina, and when she moved out he moped on the couch with me for weeks. I swear to you this is not projection, he would just lie on his side and look up at me sadly. Even the chinchilla took it better than him.

Since Friday I've tried to talk to him, give him something, or gone to pet him at least 25 times. The new babies are fun and silly, and Datte is still going strong, but none of them are Sanapig.

I miss you, buddy.

Entry also posted at http://mousapelli.dreamwidth.org/889929.html if you'd rather comment there.
Collapse